For this writer, the election of Donald Trump as the 45th president of the United States didn’t come as a surprise. The same, however, could not be said of numerous “experts” and media political pundits, many of whom responded in shock and incredulity to the result in the early hours on November 9. Independent journalist, Neil Clark quoted one irate Oxford-educated columnist who tweeted:

“Just woke up. Jesus H Christ, America. What the f*** just done. You should be ashamed of yourselves.”

For such “experts” the idea that ordinary American’s could have voted for a chauvinistic, misogynistic and demagogic racist as opposed to a what the media bubble perceived was Clinton’s modern liberal and humanist values and sense of dynastic self-entitlement, was inconceivable. The pollsters who were wrong about the 2015 UK general election, the EU Referendum and Corbyn’s election victory, predicted with near unanimity that Clinton would win as illustrated by CNBC in the graphic below. 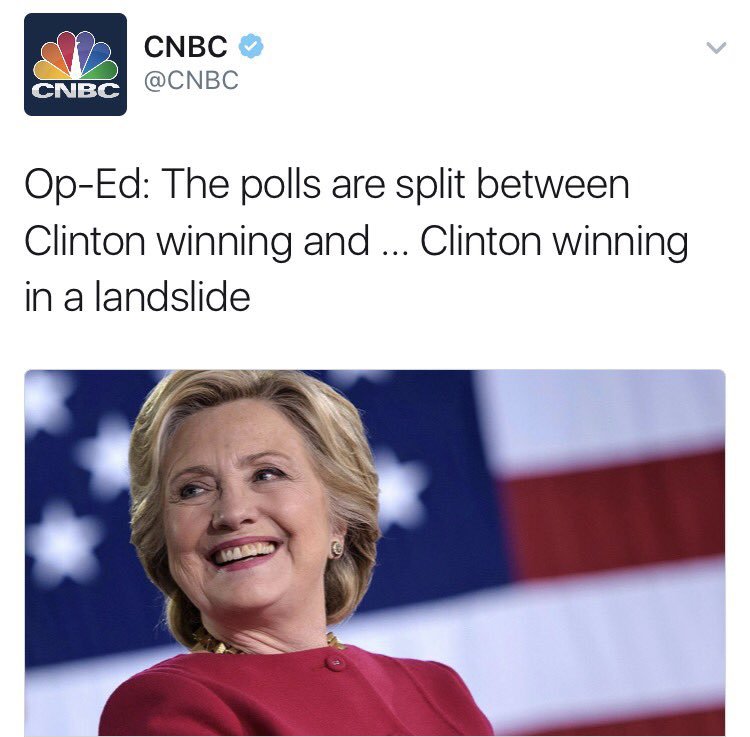 Analysis of the polls prompted Dan Hodges, who has been wrong on virtually everything else, to make the following prediction on Twitter: 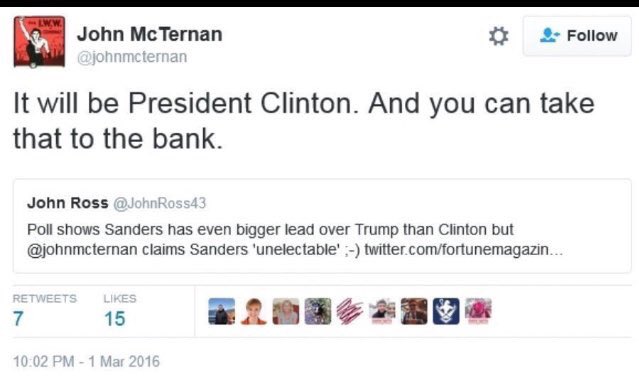 The “expert” views above were largely predicated on what the polls were telling them. In view of the pollsters latest debacle, it must be increasingly obvious to the public that the purpose of the metropolitan media elite’s use of polls – which as Mark J Doran pointed out – “are expensive and have no shelf-life” – is to influence, rather than reflect, public opinion.

The notion that Trump’s flamboyant and largely inflammatory campaign was directed at a disillusioned, disenfranchised and alienated working class, while Clinton’s rather lackluster and robotic campaign was aimed towards a corporate-media elite, appeared to be beyond the understanding of the liberal-left broadsheets. Jonathan Freedland’s piece for the Guardian entitled, Who is to blame for this awful election?, for example, was written as if he had just ventured to earth from another planet.

At no point did Freedland make reference to Clinton’s complicit role in the destruction of Libya, the dismembering of Syria, her role in Honduras or the comments she made in relation to Palestinian elections. Neither, did he mention the disastrous domestic economic policies of the Obama administration and its fetishizing of neoliberalism, or the wider ratcheting-up by the establishment of anti-Russian propaganda. Instead, the politics of identity were preferred. It appeared to be beyond the comprehension of the Guardian journalist that one of the main reasons why the American people voted Trump into power was that the failed economic policies of his predecessors over the last two decades, have resulted in a fall in their incomes, while those at the top have increased.

Neither, apparently, had Freedland considered that the de-industrialization and hollowing-out of U.S cities and the mass outsourcing of jobs, might actually equate to the American public voting for a politician who promised a major programme of investment in public infrastructure, a revitalization of industry and the creation of millions of jobs to boost a flailing economy akin to the New Deal. Nowhere were these factors mentioned in Freedland’s analysis. But perhaps most significantly of all, not a single reference was made in respect to the American public’s lack of any desire for a new cold war and military confrontation with Russia which Clinton’s rhetoric promoted, nor of the Wikileaks revelations of her e-mails proving “beyond reasonable doubt the extent of Hillary’s corruption.”

Predictably, recriminations from liberal academics and others followed the realization that Trump had won. Economist Paul Krugman, for example, exclaimed on Twitter:

“Btw, Jill Stein has managed to play Ralph Nader. Without her Florida might have been saved.”

Krugman’s tweet was a clear slur on all those who had the temerity to vote on principle for a candidate who was closer in ideology and policy to Sanders than Clinton.

Meanwhile, this is what @RachelleLefevre had to say on the subject:
“The numbers don’t lie: If you voted for Gary Johnson or Jill Stein, you voted for Trump. You were told. Don’t ever tell yourself different.”
I responded to Rachelle’s tweet with:

“Let me guess. During the primaries, you favoured warmonger Clinton over the man who would have beaten Trump?”

This is important. The Democratic National Committee rigged the election against Bernie Sanders in order to ensure their favoured candidate, Clinton, would win. I’m almost certain that had Sanders run against Trump he would have won the race to the White House. So its somewhat rich for a Clinton supporter to be critical of people for voting for a third candidate on the basis that it split the Clinton vote.

There’s an argument to be had whether there’s a core element among Trump’s supporters motivated by the racist sentiments and crass economic nationalism expressed by the president-elect. It’s also legitimate to acknowledge the anti-intellectualism and ‘post-truth’ nature of modern society in which major grievances are embodied, for example, in the comments of Michael Gove and the public’s reaction to the High Court judgement regarding Brexit. But this is vastly overshadowed by the real socioeconomic concerns of the mass of working people in terms of the race towards the lowest wages, employment rights and working conditions in an era of neoliberal globalization.

It’s the latter that Freedland and other metropolitan elite commentators and journalists routinely fail to acknowledge in their articles and opinion pieces. The reason they fail to acknowledge it, is because they don’t understand what’s going on and totally underestimate the public’s disdain towards them. As Bernie Sander’s put it on Twitter:

It’s this failure to understand that contributes enormously to the rise of right-wing populist movements of which Trump’s electoral success exemplifies. The gap between what elite political commentators believe is credible on the one hand, and the reality on the ground on the other, is enormous. Unless this gap closes, corporate newspaper sales will continue to decline. With declining readership comes falling advertising revenues which means more newspapers going to the wall in the months and years ahead.