Last week a prominent independent journalist claimed on Twitter that my assertion Owen Smith was effectively a Tory was “intellectually lazy”. Coincidentally, a few days later on Thursday’s (September 8) edition of BBC’s Question Time during the Labour party leadership debate between challenger Owen Smith and incumbent Jeremy Corbyn, a studio audience member and Corbyn supporter accused Smith of “being in the wrong party”.

Smith responded angrily to this suggestion by denying this was the case and asserted that the claim amounted to a term of abuse. Smith’s view was supported the next day (September 9) on Twitter by Smith supporter, John McTernan who said that such a suggestion was “ludicrous”. Of course, nobody is claiming that Smith, in the literal sense, is a Tory, but his voting record in the House of Commons and his commercial activities outside it, would indicate that he might as well be.

So let’s take a look at his record. Since at least July, the public relations professional, Smith, has pitched himself as a ‘soft-left’ anti-austerity alternative to Corbyn. This implies that Smith is first and foremost concerned with image and branding as opposed to adopting a principled political and ideological position.

The ‘soft-left’ Smith had previously given interviews supporting PFI and, as chief lobbyist for the U.S multinational Pfizer, he actively pushed for the privatization of NHS services. Commenting on a Pfizer funded ‘focus group’ study as part of a press release, Smith referenced and promoted the notion that the precondition for greater availability of healthcare services was the ability of the public to be able to pay for them. This is one of the significant passages from a section of the study that Smith was keen to promote:

“The focus groups… explored areas of choice that do not yet exist in the UK – most specifically the use of direct payments and the ability to choose to go directly to a specialist without first having to see the GP.”

In other words, Smith favours direct payments from the public to doctors as a replacement for current NHS services. This policy strategy is consistent with the 1988 Tory ‘self-funding’ privatization blueprint for the NHS drawn up by Oliver Letwin and John Redwood. In the document ‘Britain’s Biggest Enterprise: ideas for radical reform of the NHS’, Letwin and Redwood suggest that the aim of charging is to “replace comprehensive universal tax funding for the NHS.”

Smith’s conflation of greater choice with an ability to pay, represents one more stage in the execution of Letwin and Redwood’s plans. The implementation of these plans were accelerated by Blair and Brown as documented by Leys and Player in their book The Plot Against the NHS. Smith intends to continue where Brown and Blair – then Lansley and now Hunt – left off as part of the final stages of the wholesale Letwin-Redwood privatization blueprint of which the 2012 Health & Social Care Act  is a major component part.

Since the 2015 general election, the Tory government have explicitly admitted that the NHS should be modelled on US-style “accountable or integrated healthcare” which is where Smith’s connections to Pfizer come in. In addition to his Policy and Government Relations role for the giant US corporation, Smith was also directly involved in Pfizer’s funding of Blairite right-wing entryist group Progress. Pfizer gave Progress £52,287 while the latter has actively pursued the agenda of PFI and the privatisation of NHS services.

So while Smith’s image is largely predicated on his attempt to convince the Labour membership that in policy terms he publicly supports Corbyn’s position that the NHS should remain a universally free at the point of delivery service, in reality nothing could be further from the truth.

Smith also supported Blair’s city academies that have continued under the Tories as well as assiduously courting the arms industry of which his support of Trident is a reflection. Arguably, most important of all, is that Smith effectively lined up with the Tories, alongside another 183 Labour MPs in July last year by refusing to vote against the Conservative governments regressive and reactionary policy of welfare cuts to some of the most vulnerable people in society.

In an Orwellian rejection of socialist values, Blairite Iraq war apologist and establishment gatekeeper, John Rentoul, affirmed his support for the policies of Owen Smith on Twitter:

Apart from the last point, which I don’t think is true, a good checklist for why people should vote for Smith 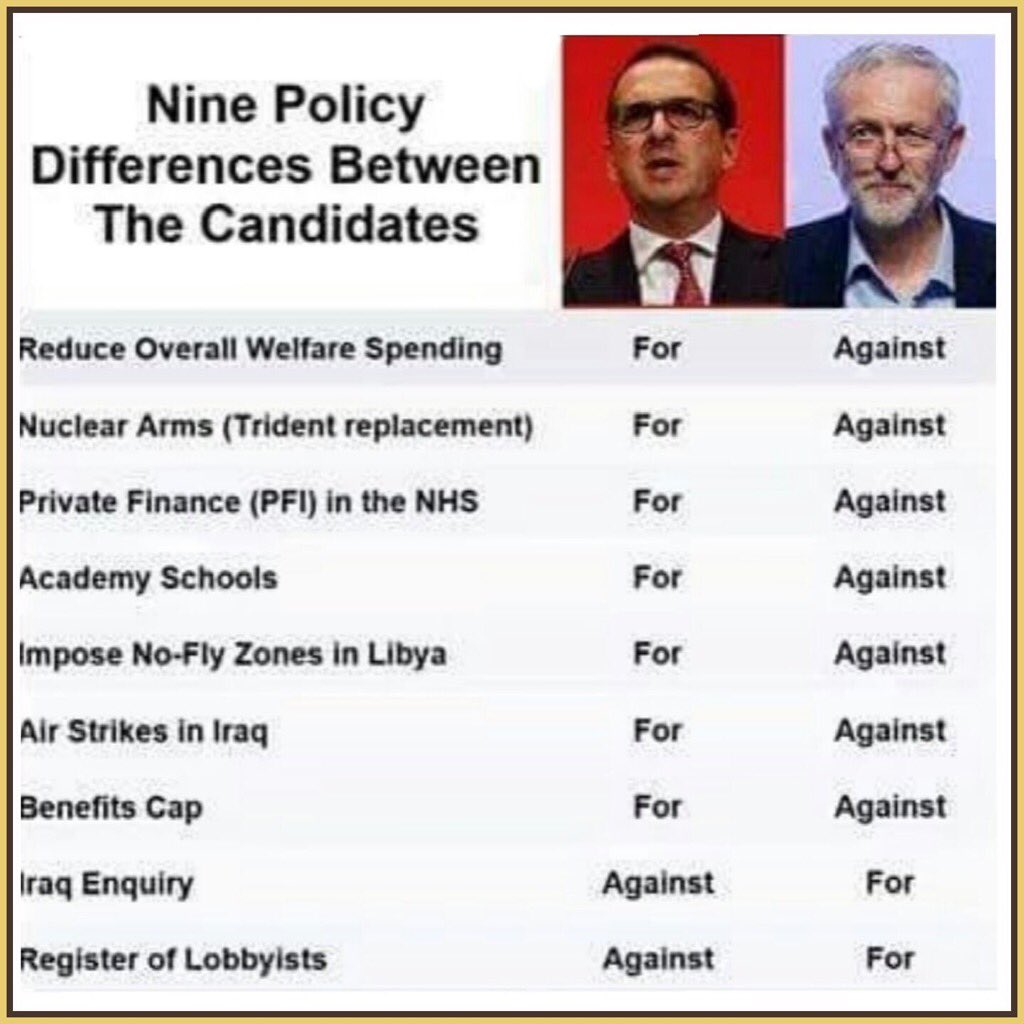 As the graphic above shows, and as Craig Murray correctly posits:

“There is no evidence whatsoever that Smith is a left winger. There is every evidence that he is another New Labour unprincipled and immoral careerist, adopting a left wing pose that he thinks will win him votes.”

The graphic below highlights the hypocrisy of Smith and, by extension, his total contempt for ordinary Labour party members.

Smith’s acquiescence to corporate power is indicative of a wider democratic deficit within the liberal democracies of the West in an era of globalization more generally. But his close relationship to the PLP and the Tory-Labour establishment consensus that they represent, reflects a relatively recent historical pattern in which governments of both the left and the right have prioritized the interests associated with private capital over and above that of labour.

Thus the first serious attacks on the welfare state in Britain came not in 2008, or even with the election of Margaret Thatcher in 1979, but several years previously, with that of a Labour government in 1974. Contrary to popular belief, dismantling the welfare state was not a key priority for Thatcher following her election in 1979. It was not until her third term of office in 1987 that Thatcher and her advisers (notably the Sainsbury’s chief executive Sir Roy Griffiths) began to develop the neoliberal ideas of the Chicago School.

These ideas were subsequently picked up and developed by New Labour under Tony Blair following his election victory in 1997. It was during this point that the introduction of competition into public services, ideas about the state as purchaser of public services and the outsourcing and privatization of health and social care services, became the norm.

The privatization of the NHS, made possible by the 2012 Health and Social Care Act, arguably poses the most immediate threat to the welfare state in the UK in its totality in which the outsourcing of services becomes the default position. The functioning of a welfare state that increasingly serves the minority interests of capital at the expense of fulfilling the needs of the majority of the population, is a process driven by a neoliberal-driven ideological consensus rather than any pragmatic attempts at ameliorating deficits and the encouragement of socioeconomic and environmental sustainability.

It’s the continued satisfying of minority elite interests rather than the wider public good that Owen Smith and the establishment – of which he is a part – are embedded. That’s fundamentally the reason why there is nothing that separates Owen Smith from the neoliberalism of Blair, Brown, Miliband, Major, Thatcher and May.

Whether one agrees with Jeremy Corbyn’s politics or not, he at least offers a genuine alternative to the consensus view that Smith represents. Even the right-wing commentator, Peter Hitchens, recognizes that the emergence of Corbyn is important to the adversarial nature of political discourse and, by extension, to democracy itself. If the UK was a healthy democracy instead of an effective corporate-political-media oligarchy, this development would be welcomed. Instead, Corbyn is demonized and smeared at almost every opportunity.

7 thoughts on “Why Owen Smith is a Red-Tory”