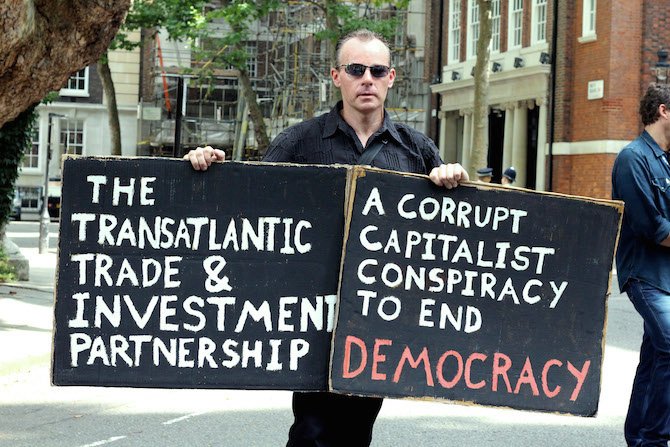 Equality before the law is one of the most fundamental principles underpinning justice. It is therefore an act of utter insanity to want to roll back the gains that has seen societies’ flourish as a result of the enactment of these principles and yet that’s precisely what the UK government like that of the US and 13 other EU members seem to be sleepwalking into rubber stamping.

Fifteen years ago, George Monbiot analysed the extent to which the UK government – through the dictates of the Private Finance Initiative (PFI)- had essentially become captive to the infiltration of the state by corporations’ on the national level. What is now being proposed transnationally, is essentially the capture of national sovereignty by multi-national corporations.

The Investor-state dispute settlement (ISDS), a procedural mechanism that allows foreign investors to sue states’ for damages in a tribunal of arbitration, have in recent years, increased in number and value. They are set to grow exponentially if the Transatlantic Trade and Investment Partnership (TTIP) which sets the provisions for ISDS, is allowed to go ahead as expected next year.

It will effectively mean that corporate lawyers across the EU and US will be allowed to overturn the laws of individual democratic governments’ with a view to them seeking massive compensation claims on behalf of the corporations they represent on the basis that likely “future anticipated profits” would be adversely affected.

The provisions of the draft agreement which was conducted in secret and only came to light after their contents were leaked to the media in March 2014, followed the results of a public consultation undertaken by the European Commission. Neither appears to have done anything to ally public concerns over the proposed deal which, should it end up being finalized in its current form will, as I will attempt to show below, have profound negative implications for Western democracy.

In December 2013, a coalition of over 200 environmentalists, labour unions and consumer advocacy organizations on both sides of the Atlantic sent a letter to the US federal agency responsible for trade policy, the United States Trade Representative (USTR), and European Commission demanding the ISDS be dropped from the trade talks, claiming that it was “a one-way street by which corporations can challenge government policies, but neither governments nor individuals are granted any comparable rights to hold corporations accountable”.

Clearly, the clauses in the trade agreement relating to investment protection are open to abuse, as is the undermining of national sovereignty resulting from this potential for abuse – issues that were tackled in a Guardian article by Owen Jones. Expanding on this, Martti Koskenniemi, professor of International Law, warned that the planned foreign investor protection scheme within the treaty, similar to World Bank Group‘s International Centre for Settlement of Investment Disputes (ICSID), would endanger the sovereignty of the signatory states by effectively allowing for a small circle of legal experts to be given the power to usurp democratic legislative procedures and standards.

Professor Colin Crouch describes TTIP as “post-democracy in its purest form”. By this he means it represents a deficit in democratic accountability in which the structures of the state have ceded their powers to the imperatives associated with multinational capital. Post-democracy in these terms equates to the shifting of power towards corporations’ where deals are often struck in secret out of the reach of public bodies whose democratic role is to scrutinize them in the public interest.

Whenever scrutiny is removed, the burden of both economic and environmental risk relating to deals between political elites and corporate lobbies, tend to tilt towards the public sphere who pick up the pieces by way of what economists euphemistically refer to as “externalities”. Often, for example, deals involve the construction of large infrastructural vanity projects including football stadiums, Olympic villages and the like, that usually come with negative knock-on environmental, ecological, employment and economic impacts.

The London mayor Boris Johnson’s less than transparent involvement in the Olympic Stadium deal between the London Dockland Development Corporation (LDDC) and Premier League football club, West Ham United, brokered by Lady Brady, is an example of how both the political and business elites mutually benefit from these kinds of potentially environmentally and economically (for the tax payer) damaging and secret deals.

As the Blatter scandal, and more recently, Sebastian Coe’s cozy relationship with Nike and his other underhand dealings illustrate, the corporate, government and national authority ties within the high echelons of sport, are indicative of a wider corruption, albeit an informal kind that, unless you happen to be foreigner, is rarely acknowledged within the British establishment.

In such cases, corruption is normally regarded to be an activity restricted to “tin-pot” dictatorships in the developing world rather than something that has arguably become “normalized” and symptomatic of a broader societal and economic malaise conducive to political life within formal Western liberal democracies’.

With virtually every public asset being up for grabs in the era of neoliberal globalization (and hence reduced to a crude form of exchange value by the elites), means that all aspects of our existence are to be potentially ceded to the altar of profit and multilateral economic growth. This is precisely the aim of TTIP.

But of course not all values are perceived in this crude narrow sense. Employment, environmental, and even food standards protection which TTIP is set to undermine, for example, are concomitant to the public good. Within the context of a finite planet, the same cannot necessarily be said of economic growth.

Another value that cannot be measured in strictly economic terms is happiness and contentment. Can it really be said with any conviction that we, in the first world, are generally happier and more content than people in the developing world?

Chilean economist Manfred Max-Neef brings some valuable insights into play within this area. Having worked for many years of his life in extreme poverty in the Sierras, in the jungle and in urban areas of different parts of Latin America, Max-Neef recalls:

“At the beginning of that period, I was one day in an Indian village in the Sierra in Peru. It was an ugly day. It had been raining all the time. And I was standing in the slum. And across me, another guy also standing in the mud — not in the slum, in the mud. And, well, we looked at each other, and this was a short guy, thin, hungry, jobless, five kids, a wife and a grandmother. And I was the fine economist from Berkeley, teaching in Berkeley, having taught in Berkeley and so on. And we were looking at each other, and then suddenly I realized that I had nothing coherent to say to that man in those circumstances, that my whole language as an economist, you know, was absolutely useless. Should I tell him that he should be happy because the GDP had grown five percent or something? Everything was absurd.”

We have reached a point in our evolution in which we know a lot. We know a hell of a lot. But we understand very little. Never in human history has there been such an accumulation of knowledge like in the last 100 years. Look how we are. What was that knowledge for? What did we do with it? And the point is that knowledge alone is not enough, that we lack understanding….”

The overriding factor that has given Max-Neef hope in the poor communities that he has lived and worked in is:

“Solidarity of people… respect for the others. Mutual aid. No greed. Greed is a value that is absent in poverty. And you would be inclined to think that there should be more there than elsewhere, you know, that greed should be of people who have nothing. No, quite the contrary. The more you have, the more greedy you become, you know. And all this crisis is the product of greed. Greed is the dominant value today in the world. And as long as that persists, well, we are done….”

According to Max-Neef, the best principles of economics are based in five postulates and one fundamental value principle:

Two, development is about people and not about objects.

Three, growth is not the same as development, and development does not necessarily require growth.

Four, no economy is possible in the absence of ecosystem services.

Five, the economy is a subsystem of a larger finite system, the biosphere, hence permanent growth is impossible.

And the fundamental value to sustain a new economy should be that no economic interest, under no circumstance, can be above the reverence of life.”

“Growth is a quantitative accumulation. Development is the liberation of creative possibilities. Every living system in nature grows up to a certain point and stops growing. You are not growing anymore, nor he nor me. But we continue developing ourselves. Otherwise we wouldn’t be dialoguing here now. So development has no limits. Growth has limits. And that is a very big thing, you know, that economists and politicians don’t understand. They are obsessed with the fetish of economic growth” [My emphasis].

“…In every society there is a period in which economic growth, conventionally understood or no, brings about an improvement of the quality of life. But only up to a point, the threshold point, beyond which, if there is more growth, quality of life begins to decline. And that is the situation in which we are now.”

The aim of TTIP, is the promotion of multilateral economic growth (of which the ideology of progress is seen as emblematic). Paradoxically, this corresponds to the decline in the quality of life characterized by runaway climate change and the undermining of environmental protection that this implies.

The law of diminishing returns as inferred by Max-Neef, would suggest that humanity is currently at the threshold point. It’s up to us to determine our future path and those of our children and children’s children. In order to do that we need to break with the current socioeconomic paradigm.

One thought on “Barefoot economic values, TTIP & the democratic retreat.”