Leading American venture capitalist Nick Hanauer has argued that the actions of capitalists’ need to be reined in through a system of planned and coordinated regulation in order for the capitalist system to be sustainable. This is what he said in a BBC TV interview in front of a live audience:

Capitalists have the idea that THEIR things will be bought by everybody else as a result of higher wages paid by OTHER capitalists. But this logic of paying higher wages to staff to help improve business activity more generally, doesn’t seem to apply equally to them since they will insist on paying THEIR OWN workers next to nothing thereby not absorbing the costs themselves resulting in them gaining a competitive advantage over their rivals. The simple truth is, if a higher minimum wage was introduced universally, not only would it be affordable, but something like 40% of American’s would be able to buy more products from everybody thus benefiting all capitalists across the board. Business is challenged today because fewer and fewer people are able to buy things [1]. 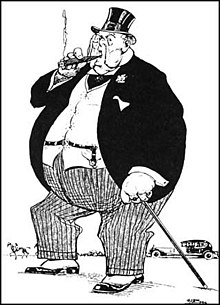 The implication, in other words, is that the capitalist system needs to be regulated by governments’ in order to save it from the rapacious actions of competing capitalists driven by their insatiable need for profit maximization. This rationale was long ago grasped by Karl Marx who understood that the essence of the capitalist system is, in his phrase, “accumulation for accumulations sake.”

So why don’t capitalists insist on using free labour and make their workers work all the hours under the sun? After all, wouldn’t that lead to higher profits? And one might also ask why their representatives within the elite political establishment would bother to spend any money at all on welfare? The simple but correct answer is that where they have a choice, they don’t. Where labour supply is low, the state is in effect forced to intervene on behalf of capitalists by introducing welfare as the means of preserving and reproducing labour.

But where labour is plentiful, the state rarely feels compelled to introduce health and safety, minimum wage laws and welfare.The rationale for this is that if a worker dies of malnutrition or has an accident at work, he or she can be easily replaced by another worker. Under such circumstances, the state regards these kinds of misfortunes as a price worth paying. Consider this account of the conditions of child labour in the lace industry in Nottingham in 1861 by a local magistrate:

Children of nine or ten years are dragged from their squalid beds at two, three, four o’clock in the morning and compelled to work for a bare subsistence until ten, eleven or twelve at night, their limbs wearing away, their frames dwindling, their faces whitening, and their humanity absolutely sinking into a stone-like torpor, utterly horrible to contemplate [2].

Compare and contrast that to a recent study of the conditions of life for rural migrants in contemporary China:

The trafficked children] came from faraway Liangshan in Sichuan and most of them are not yet 16. The overseers sought and recruited them from families mired in poverty, promising them high wages; some were even abducted and sent off in batches to Dongguan and from there distributed by the truckload to factories across the Pearl River Delta. On unfamiliar soil these children are often scolded and beaten and have only one proper meal every few days. Some little girls are even raped. Day after day they undertake arduous labour. Some children think about escape, but the road is blocked. The overseers threaten them and warn them that if they try to run away, there will be a price to pay [3].

What the above illustrates, is that the plentiful supply of labour power was as pertinent during the early days of the industrial revolution in Britain as it is to present day China. In both cases the introduction of welfare as the means of preserving and reproducing labour was not a concern for capitalists or the state. Consequently, welfare provision is as scant in China today as it was in 19th century Britain.

Similarly, while the deaths of more than 1,100 garment workers in a factory building collapse in Dhaka,Bangladesh, in April 2013 [4], most of them women on subsistence wages, is an unspeakable tragedy for their families and friends, it is of much less significance, other than concerns about negative publicity, for companies such as Primark for whom they were producing cheap clothes, simply because there are plenty more desperate workers who will take their place [5].

Where, however, the supply of labour is less plentiful or where labour becomes more skilled and consequently more expensive, losing workers through injury or disablement, or through working them to death doesn’t really make economic sense. But that doesn’t mean that capitalists in Britain or America wouldn’t insist that their workers work all the hours under the sun in the short term for peanuts if they thought they could get away with it.

One of the contradictions inherent to capitalism is that the system as a whole needs to spend money to make profits, yet every individual capitalist wants to spend as little as possible. The lengths to which giant companies like Amazon, Google and Starbucks will go in order to avoid paying tax shows how that dilemma is played out.

In the longer term, having workers working 14 or 16 hours a day for peanuts is very wasteful. It’s like over-exploiting the soil. However, given that individual capitalists themselves won’t do anything about it for fear of losing their competitive advantage over their rivals, the state as the representative of the capitalist class as a whole is forced to step in.

This brings me back to the wisdom implicit in the Nick Hanauer quote at the beginning of this article. Hanaeur’s argument about the necessity of the United States government to substantially increase the legal minimum wage across the board in order to save capitalism from itself, is in principle, no different from the minority of capitalists in 19th century Britain who argued in favour of the introduction of the Factory Acts of the 1830s and 1840s which set down a maximum length for the working day.

An advanced low wage and minimal welfare provision capitalist state like Britain is the modern equivalent of its counterpart during the industrial revolution prior to the introduction of the Factory Acts. What is required is a radical re-think with regards to our current direction of travel.away from the failed neoliberal economic model of austerity which economist Paul Krugman describes as:

A con that does nothing but harm to the wealth of this nation. It has been discredited everywhere else: only in Britain do we cling to the myth.[6].

It’s in Britain where the redistribution of wealth from the bottom to the top continues at apace, much of it as a result of huge subsidies paid to the richest landowners [7]. As inequality continues to rise so does the potential for public disorder. At present, the richest tenth pay 35% of their income in tax, while the poorest tenth pay 43% [8]. Is it too much to ask that those with the deepest pockets pay their way, thus creating the potential for the kind of equitable society in which everybody wins?

This is not pie in the sky stuff but a pragmatic solution to the problems we face. Individuals as politically and ideologically as far apart like Jeremy Corbyn, Caroline Lucas, Nick Hanauer, Joseph Stiglitz, and other top economists and capitalists, understand what’s required to get us out of the mess we’re in. It’s a pity that people like Duncan Smith, Cameron and Osborne prefer to put ideology before pragmatism.