Chancellor Gideon Osborne’s budget last week that represented a culmination of six years of government failures and which slipped the UK into a deeper recession, amounted to another massive transfer of wealth from the poorest to the wealthiest in society. This was reiterated by both the Institute for Fiscal Studies (see chart below) and the Office for Budget Responsibility (OBR). The Economist projects that by the end of this parliament, levels of investment – which are already one of the lowest in Europe – will fall to just 1.4 per cent of GDP, under half of what it was when the coalition government came to power. It is also half of what the OECD said is necessary just for the UK economy to stand still. But despite these facts, an alternative narrative has emerged in many of the editorials of the corporate controlled media which bare no resemblance to reality for the vast majority of the British people. As Shadow Chancellor, John McDonnell put it on LBC last week, “If press releases built things, Cameron would have rebuilt our country.” 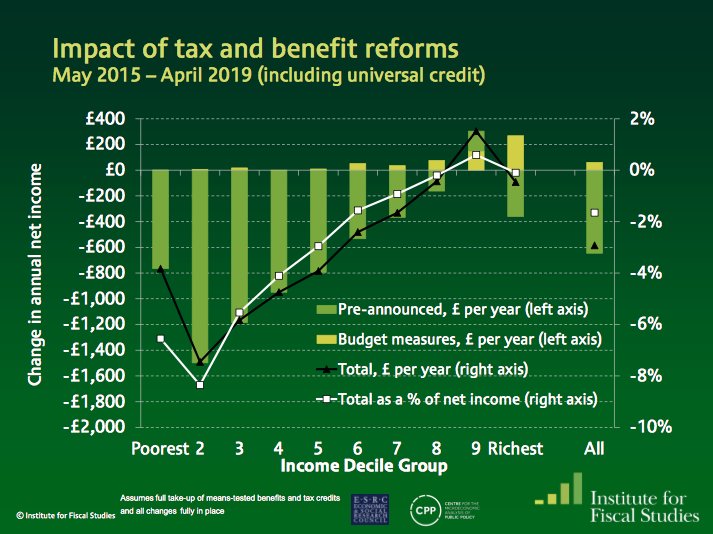 The main thrust of the budget was Osborne’s cut in funding to the disabled by £4.2 billion in order to pay for three separate tax cuts to the rich against a backdrop in which the national debt is rising by £45 per second or £2,700 per minute. Paul Mason summed up the mood in the House:

“Osborne’s glum face during Jeremy Corbyn’s speech — an uncharacteristically angry barnstormer — was matched by the glum faces of Blairites as they realised their own party was actually going to inflict moral and political damage on the government.”

Osborne’s inhumane and fiscally irresponsible budget was preceded by the fiscally responsible alternative version outlined by his opposite number, John McDonnell who, in a speech on March 11 (as well as in various interviews to the media and public meetings), laid out his parties fiscal credibility rules. The shadow Chancellor stated that he will eliminate the deficit and tackle the national debt within a five year period on the basis of the implementation of a progressive and ambitious investment programme that he said will provide the stimulus for growth and demand in the economy.

McDonnell insisted that a future Labour government would invest in skills, infrastructure and above all, technology. The speech was subsequently praised by a wide range of economists and some media outlets in addition to business organizations that included the CBI and the Chamber of Commerce. As a committed socialist, McDonnell is aware of the importance planning is to the economy and the ruthlessness that is required to properly monitor how governments’ spend and, more importantly, earn money. The whole debate is how the country earns its future which McDonnell has said ought to be focused on investment.

The difference between McDonnell’s approach and that of one of his often cited predecessor, Gordon Brown, is that the latter never went for an investment-growth strategy and relied too much on unregulated finance sector growth and the revenues generated, as the catalyst for the subsidizing of public services. This policy strategy proved to be an abject failure. Similarly, the approach under McDonnell’s immediate predecessor in opposition, Ed Balls, was firstly to underplay the drive toward investment and, secondly, was marked by his failure to recognize that governments’ have to borrow to invest in the long-term in order to grow the economy.

But equally as important, was Balls’ inability to grasp the important role organizations like the IMF and OECD play in diagnosing economic problems and how best to solve them. Specifically, Balls appeared to have underplayed the scope the combination of fiscal and monetary policy plays in combating low or negative interest rates. In contrast to the incompetence of Balls and Brown, McDonnell has expressed awareness that when government’s reach the limits of monetary policy in terms of low or negative interest rates, they have to combine the monetary with the fiscal. What McDonnell acknowledges, is the importance the building of a balanced economy plays to the modern democratic nation state.

The problem under previous government’s – both Conservative and Labour – has been that the investment in the manufacturing base, predicated on new technology, has been largely sidelined at the expense of the finance sector. On LBC, McDonnell used the analogy of a small company to outline his case. “An owner of a new company will need to invest in new machinery in order to compete against his rivals otherwise he or she will go out of business”, he said. He continued: “Government’s, like businesses, need to invest in the future otherwise their economies will fall behind.” The lack of investment is precisely what has beset the UK economy over recent decades, particularly under the latest Tory government which has overseen a widening productivity gap between the UK and its major European rivals.

McDonnell, correctly in my view, has made it clear that the Office for Budget Responsibility (OBR) should be given the power to monitor the UK’s own application of its fiscal credibility. The OBR, according to McDonnell, should not report to the Chancellor as is currently the case, but instead it should go directly to parliament. The aim is not merely to raise the economic credibility of Labour among the public but to raise it among the political class too. It’s ironical that despite the public perception that Labour governments’ have been more economically incompetent in the 37 years since Thatcher was elected than their Tory counterparts, the reality is there have been only two years – under Nigel Lawson during the boom period of the 1980s – in which the Tories produced a balanced budget. Conversely, Labour produced three years of balanced budgets under Gordon Brown.

McDonnell has been aided in his approach to countering Tory and media propaganda by some of the world’s renowned and leading economists who have not only openly backed the oppositions anti-austerity economic model but have played an active part in advising the Shadow Chancellor as part of Labour’s Economic Advisory Committee. A central plank of the fiscal responsibility rules that McDonnell and his team set out on March 11, relates to Labour’s intention to reduce debt as a proportion of GDP over the lifetime of the government. This will entail growing the economy over the requisite five year period, allied to a fiscally disciplined and controlled approach to spending. The alternative budget that McDonnell proposed emphasized the application of a process of rigorous budgeting so as to restrict the likelihood of public expenditure spiraling out of control. To this end, the Shadow Chancellor stressed the need for the treasury to return to its former role of managing public finances as opposed to signalling to government departments that they have a license to spend public money in a prodigious manner.

An example of the latter happened two years ago following the Tory government’s much criticised selling off and closing down of the Forensic Science Service (FSS) against the advice of all the relevant parties concerned. The treasury ignored the advice because they envisaged the closing of the service as being financially prudent in the short-term. Two years down the line, they decided to set it up again. It’s this kind of short-term based decision-making predicated on the top down authoritarian micro-managed approach of their principal overseer in number 11 Downing Street that inhibits not only the long term financial credibility of government, but undermines democracy and the well-being of society as a whole.

Then there are the secret and highly wasteful and expensive P F I funded projects that typified the Blair and Brown era that McDonnell says he wants to put an end to. A third example of how short-term policy approaches are counterproductive to the long-term financial well-being of the nation, is within the realm of housing. The most labour intensive form of public spending is affordable council house building which, year on year, since the era of the Thatcher government, has failed to meet the demand for them. Labour’s Housing Minister, John Healey, has stated that he intends, as a starting point, to use savings on housing benefit (which is beneficial mainly to the rich), to build 100,000 affordable homes.

Government investment in housing is not only beneficial to those in need of a home, but it also reduces the housing benefit bill. In addition, the cost of buying a house is reduced due to increasing availability more widely. Although on the surface the intention to bring greater scrutiny and accountability to bare within the public sphere sounds overly bureaucratic, the kinds of attempts to rein in government and treasury short-term excesses are nevertheless fundamental to the successful running of governments’ in the eyes of the electorate. It is this electorate that is increasingly aware of just how callous Gideon Osborne has been in the lead up to the decision to cut disability welfare benefits which allegedly prompted Iain Duncan Smith’s resignation letter.

The letter basically outlined every suspicion that voters, and indeed Tory MPs, have about Gideon Osborne in relation to his obsessive attempts to micro-manage government departments as the prerequisite to his cynical positioning as next in line to succeed David Cameron as Tory leader. In relation to Duncan Smith’s resignation, one theory espoused by former UK diplomat Craig Murray is that his conscience got the better of him and as such Osborne’s budget attack on the disabled was regarded by Duncan Smith as one attack too many. Personally, I don’t buy it.

I’m more inclined to believe John McDonnell’s interpretation as expressed on LBC yesterday (March 19). McDonnell claims that the former Work and Pensions Secretary went through a long consultation exercise which specified the new proposal for the qualification criteria for the Personal Independence Payment (PIP). As a result of pressure from Osborne, McDonnell claims that Duncan Smith had no option other than to tear the agreement up.

In other words, a deal was allegedly done but Osborne is said to have reneged on it. This put pressure on Duncan Smith who, in turn, McDonnell claims, had taken the flack for something that was not ultimately his doing. Osborne had invented a fiscal rule that has been unable to withstand political scrutiny and the public, judging by the latest opinion polls, are wise to it. Let’s hope they will continue to be wise to the government’s various shenanigans prior to the forthcoming local elections and vote accordingly.

4 thoughts on “Osborne’s Budget of Irresponsibility”